I didn’t sleep that well on the street in Santa Cruz. Around 3:00 I gave up on sleeping and watched an episode of Breaking Bad. In the morning I tried to listen to NPR, but the battery got too low to make the radio function and I switched over to the NPR app on the phone. This app has some problem so that after it’s played for a while it just quits streaming. I have’t quite figured out a reliable way to make it start again. It bums me out.

Eventually I started moving and found my way to a 7-11 where I was charged $1.50 for my Diet Coke refill (it’s rarely much more than a dollar). Adding insult to injury, there was no bathroom. Thanks, 7-11. Someone on Google+ suggested that they have this policy because there are two many homeless people living in vehicles.

I found another rippy mart that had a very crowded parking lot. As I tried to get to a parking space a guy very nearly backed in to me. It would have disabled Walden’s sliding door. That would have been a bad day. There was no bathroom there, either, but there was a port-a-potty outside. Santa Cruz is not much on amenities for van dwellers.

Randall, the owner of Bonny Doon, had recommended some food truck as a spot for breakfast. I managed to find my way there and had a pretty tasty breakfast taco, which I ate in Walden on the street. 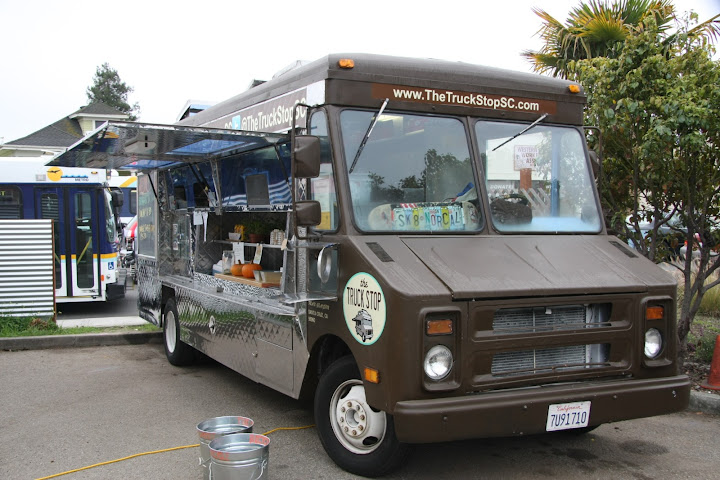 After breakfast I resumed my southerly trip down the Pacific Coast Highway. Part of it was a bit more inland through some farm country. I got a couple shots of a whole bunch of sprinklers. As I said yesterday, it’s a stunning trip down the coast. On one of the pull-offs I struck up a conversation with Gustavo, a guy from South America who was taking a few months in the states. He’d rented a Mustang convertible somewhere around LA. That’d be a great way to go. Other people thought it was beautiful too. This woman apparently couldn’t afford a camera. 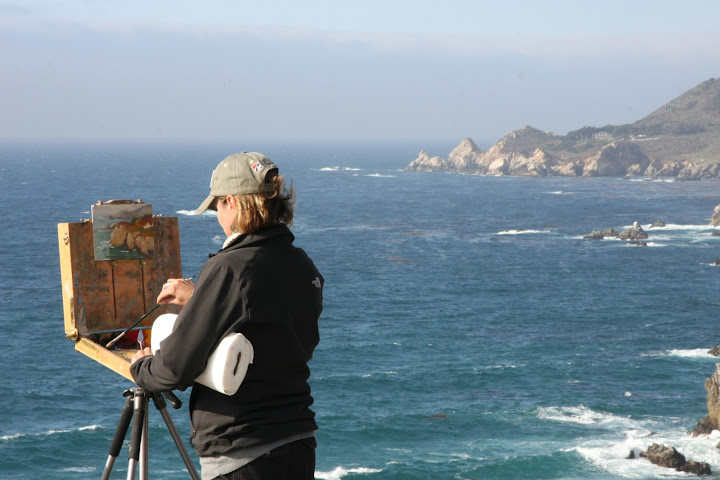 It was starting to get late and I pulled off in a campground, but it just didn’t feel right, so I pushed on. I pulled off on what looked like a forest road where I thought I might be able to find a place to park for the night, but the road got steep and narrow. I saw what looked like a line of oil running down the road. I decided that it would be wise to turn around. Back down at the bottom of the hill I stopped to ask the folks pulled over on the side if they were. I’d passed them on the way in; they were obviously traveling. At first pass it appeared that they were just hanging out, but on closer inspection, this did not look much like a picnic. That oil that I’d seen streamed down the road had recently been in their car. A rock or something rock had perforated their oil pan. I asked whether they had enough oil, they said that they did, but when I offered, they took a couple quarts.

On down the road at another pull-off there were hundreds of animals that looked to be sea lions. As I got closer though, I noticed that they had ear holes, not ear flaps, and they had short, hairy foreflippers and long claws and knew right away that they were seals. No, wait. That’s not it, I knew that they were elephant seals because there was a sign. Some helpful person had put up a sign that explained what they were. Once the sign was up, the elephant seals decided that they would just hang out there. It was pretty cool. 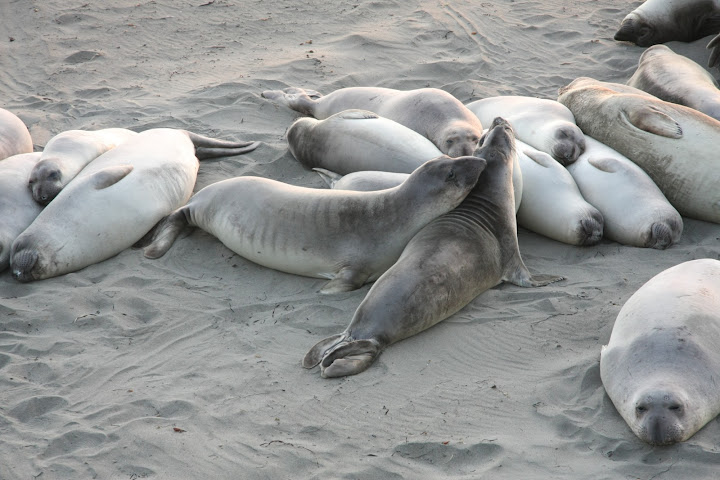 It was getting dark, and just south of San Simeon there was an enclave of hotels. I’d stayed in one of them years before when I made this trip with my wife. That had been a pretty wonderful night. We stayed in one of the cheaper hotels, but the hotel right next door built fires out on the beach. We took our bottle of wine and smoked salmon down to one of their fireplaces and watched the waves in the moonlight, warmed by the fire. I called one of the hotels and they wanted seventy dollars for a room. It seemed a bit steep and I’d slept in Walden only once in recent memory, so I headed on down to a state campground. It was already dark. There was no attendant at the booth at the entrance to the campground, but the advertised rate was $25, which seemed rather steep for a place to park. There did appear to be a shower house that accepted quarters, but the price seemed rather steep. I got on the phone and called one of the budget hotels up the road. They wanted thirty dollars for a room that had its own non-coin-operated shower. For another three dollars, I could get WIFI. I left the campground.

The woman who was checking me in said that she saw people in campers parked on the street behind the hotel all the time. At this point, though, she had already swiped my credit card. I ordered a pizza at the hotel restaurant, and headed back to the room.

I posted a bunch more pictures of the elephant seals. There’s a great series of this one flapping sand around.

5 Responses to They Don’t Look Like Elephants to Me