The route that I took to hit both Crazy Horse and Rushmore took me into Custer park, through has a loop that’s supposed to have lots of animals. I saw a buffalo ambling down the side of the road. I was going to suggest to him that it would be better to walk on the right so that he could see the oncoming traffic, but thought better of it. 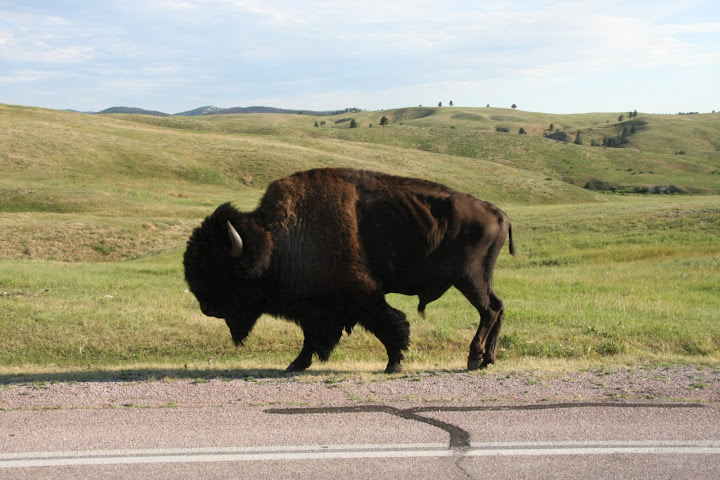 A buffalo walking down the road

Just past him, I saw these things that looked like deer, except they had these funny horns. I thought that they might be antelope, since I head that they roam, and these things were moving at a pace that was considerably slower than a roam. I later saw a picture of something that looked like them claiming that they could run 60 miles per hour or something equally preposterous. These deer-like things walked comically slowly across the road. A car came from the other direction and had to stop because these guys were blocking the road. There was a third one of them that joined them after a minute. Apparently these two had outrun the third one or something.

Editor’s note: I learned subsequently at a museum in Jackson Hole that these things are called pronghorns. The guide told me that Lewis and Clark mistook these things for antelope. They are no relation, and, in fact, are related to pretty much nothing else currently on the planet. She confirmed the whole running fast thing. 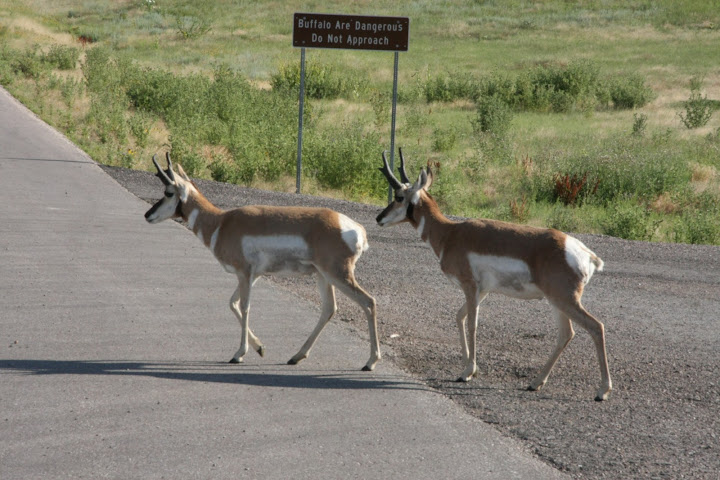 After I made it out of Custer Park I finally made it to Crazy Horse. Forgetting that it was privately owned, I tried to get them to let me in using my National Parks card. These crazy horse people are of the mind that people should work for their money and not take it from the government. I think they also were afraid that money from the feds might come with strings. It is a monumental project. I’m thinking that it’ll take several more decades to finish it. The guy who started it, who died something like a decade ago had ten kids, seven of whom are working on the project. It’s a very interesting family business. 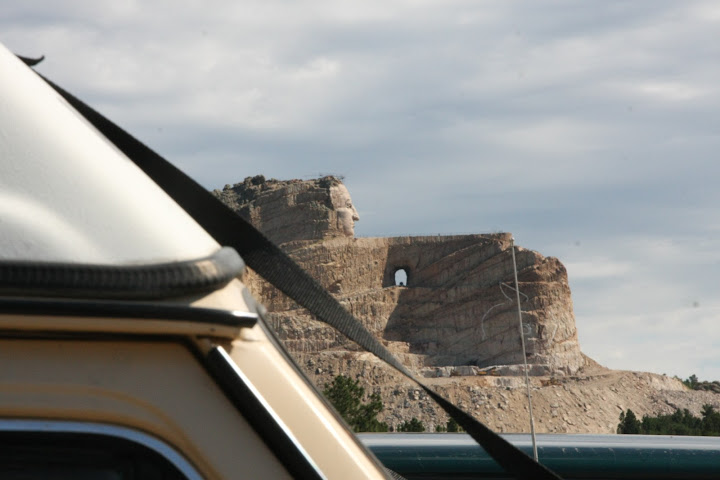 I then went down Needles Highway. I didn’t know what it was, but it sounded cool. It turns out they call it that because of these big tall skinny rocks. 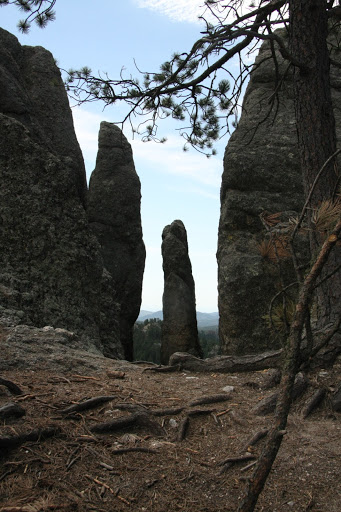 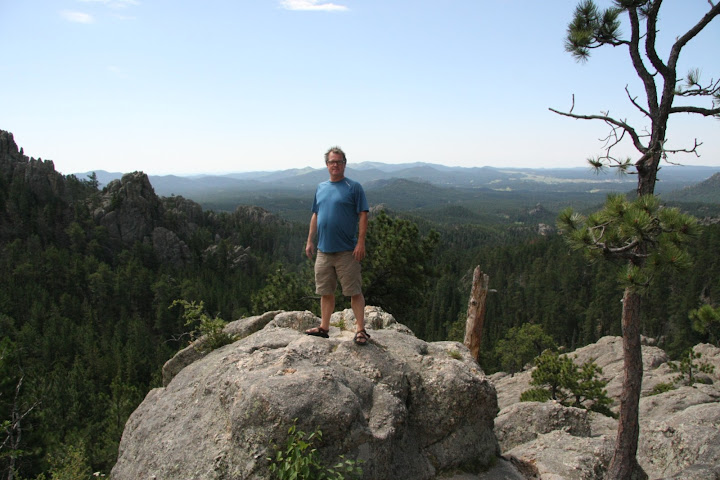 One of the cool things on that Needles road was this awesome tunnels cut into the rocks. A couple of them perfectly frame Mount Rushmore in the distance. Lots of people were stopping for photos, so I was able to get pictures of myself in a couple of them. 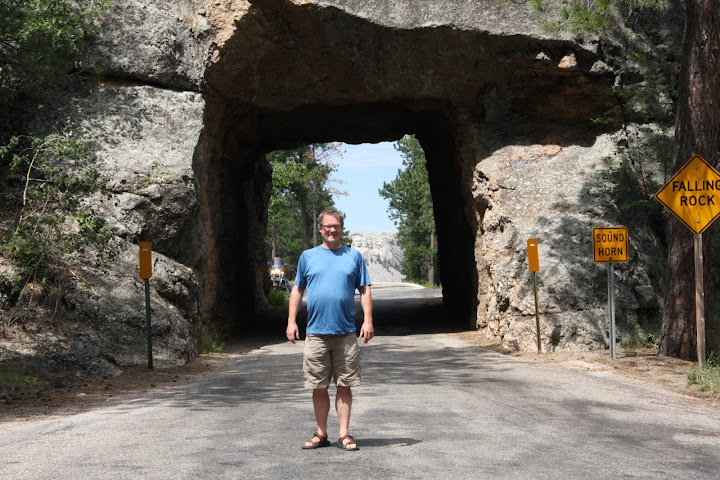 It’s free to get into the Mount Rushmore museum. Of course you have to pay $11 to park the car so that you can get there. I was a little disappointed in Mt. Rushmore. I couldn’t get close enough to really see it to my satisfaction. 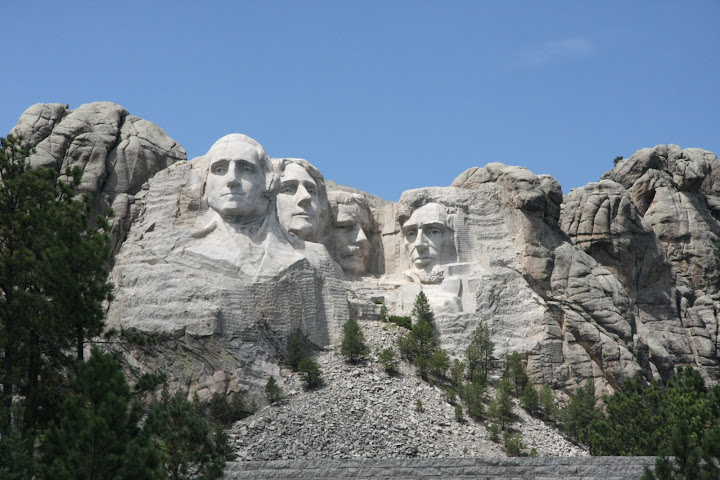 After I saw those presidents on the mountain I had driven enough for one day. It was hot. A little before 2PM I decided that I had to get a hotel room. Because it was hot. I stopped at a dumpy looking place. They wanted something like $90. That seemed absurd. And even though I was hot, I went on. I got on the phone. I called some places in the area. They were more expensive. A Holiday Inn wanted the same $140 that I had paid to stay at the cool Spa in Saratoga that had little teepees over the mineral spring-fed pools. It was hot. I stopped thinking clearly. I paid $90 for a Super 8. There was air conditioning and wifi. I learned the next day that if I had driven another five miles to I-90 I could have gotten a $50 room. Also, by five, it had cooled off considerably. In retrospect, I probably should have just gone and hung out in a restaurant for a few hours and then found a place to park, but I’m not sure that I could have known that then. And I was hot. Cooling off was really good.

A bit after five I had cooled off and headed to Mexican place that had decent ratings according to Yelp! or something. Before I got there, I noticed that there was another Mexican place half a block from the motel. I figured it would be crappy, but the sign said something about half price Margaritas and it was right there. I was right.

You can see more photos here.