I headed out pretty early and bought ice in Custer. Can I just tell you how oppressive it is to buy ice every day? Out here I can find 10 pound blocks (rather than the stuff you usually get that you can put in your drinks). I’ve gotten dry ice a couple of times and think that dry ice could be a good way to go. I figure I’m spending over $100/month on ice. It’s making it pretty tempting to get an Engel 84-quart Fridge/freezer, which will make it all the more tempting to get the GoWesty Sol-Charger Solar Panel Kit. If I could walk down the street and buy the stuff today, I just might do it. However, since I don’t know where I’ll be from day to day, it’s difficult to figure out where I might have the stuff shipped.

I made to Wind Cave a few minutes late to do the 10 am Natural Entrance Tour. It doesn’t actually go in the natural entrance, which is barely sixteen inches in diameter. That original entrance is there and the day I was there, there was a strong blast of cool air coming out, hence the name. Since the only way that air can get in and out is very small, there is almost always a breeze as the barometric pressure in the cave tries to equalize with the pressure outside. The entrances that they have added all have airtight portals. Since I missed the 10AM tour, I instead did the 10:20 Fairgrounds Tour. It was enjoyable. I didn’t get as many pictures as I did at Jewel Cave because there weren’t as many hand rails that I could affix my little Gorillapod tripod and I wasn’t the “caboose” (the Jewel Cave tour guide asked for a volunteer to bring up the rear to make sure no one had been left behind, and I volunteered.)

From there I headed on down to Hot Springs. I got a route from the info center, but first went to the swimming hole at Cascade Falls. It was a beautiful little swimming hole, with rapids and a shallow pool up top and a bigger pool deep enough to dive into down below. There wasn’t much beach to hang out on, though, and what little space there was available was all occupied, making it difficult to do anything but hang out in the water. I didn’t stay for long, but it was nice to get a cool dip in some cool clear water. 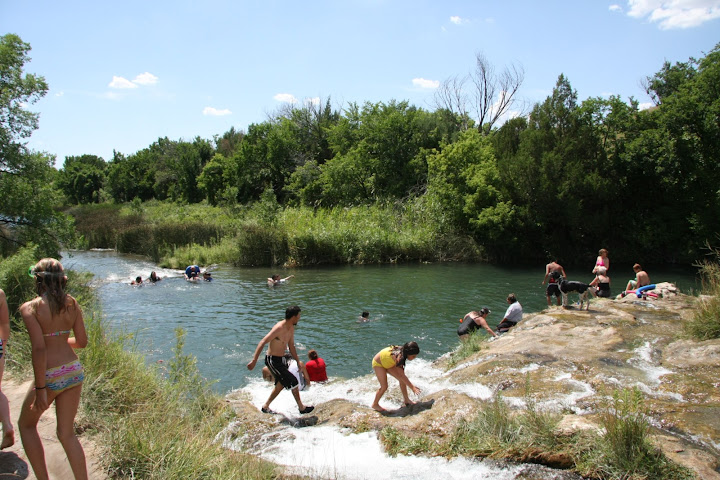 On the way back through Hot Springs, I stopped at a convenience store. There I saw a pickup truck loaded with bikes with life preservers duct taped to their handlebars. 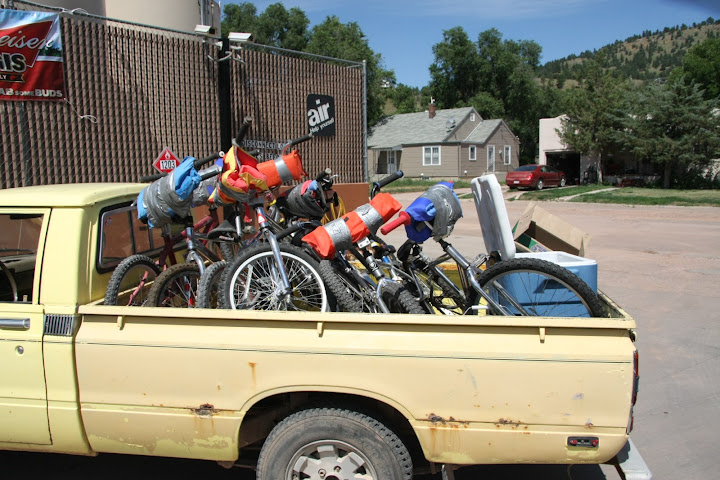 I had to ask the guy what the deal was. He said that soon he would be riding these bikes down a hill, up a ramp, and landing in a reservoir and that there was a campground there. Mount Rushmore would have to wait.

As the photographic evidence shows, it was pretty cool to watch. I considered jumping myself, but chickened out. I hung out for a good while and took lots of pictures, which are worth a look. (If you were there and want higher resolution pictures or yourself or your friends,
let me know. I think I have a couple hundred more, but am not going to bother posting them if you aren’t going to look at them.) 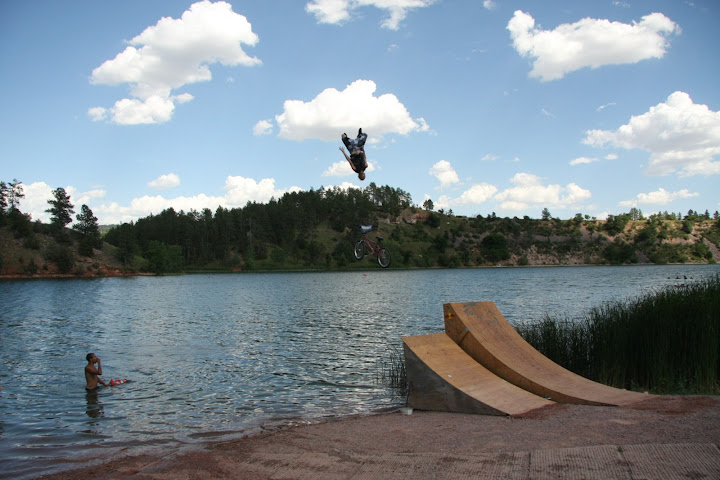 I chatted with one group of people only briefly and after you’ve seen thirty or so jumps, you’ve seen enough. At about 5:30 I hit the campground, trying to get a space that would soon be in the shade. At 8PM it was still very hot. 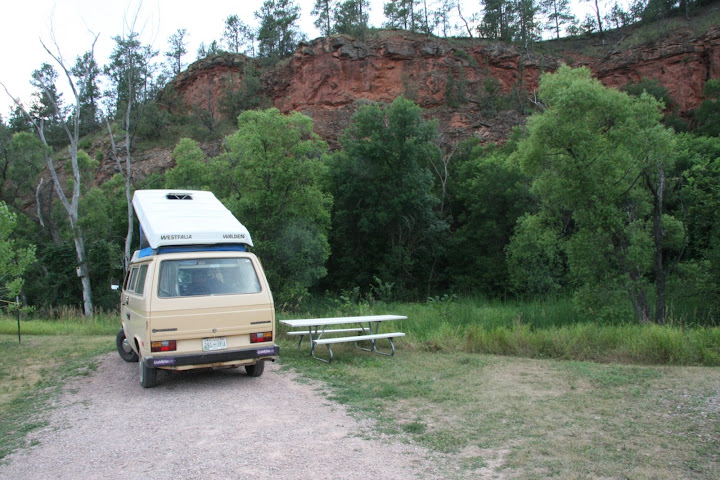 Did I mention that it was still very hot?

Nearly every campsite had a fire going. I couldn’t understand why people had fires. It was hot, the desire to have a heat source anywhere in the vicinity completely eluded me. Thinking that this would be an acceptable conversation starter, I went over and asked people at the next camp site. They were cooking on theirs, which made some sense. They also hypothesized that even if it’s hot, people want s’mores. Besides, fire is just plain fun. I’d sort of forgotten that. Maybe I had some residual effects from the whole house burning down thing. I ended up hanging out with them for a while. I offered to leave when their dinner was ready, but was invited back.

They had lived in Boulder, CO for the summer and were now taking a few weeks to get back to some small school in the midwest where this Australian guy was attending on a full ride on a bicycling scholarship. He told stories about traveling when he was a kid and how he would always go to different campsites and talk to different people. I was starting to believe that people traveling generally are happy to talk to other people who are traveling.

It threatened to rain, so he went off to set up the rain fly, thus it was time for bed.