This morning, I got up. I try to do that every day, whether I need to or not.

Next, I carried the Big Ikea Bag into Walden. I use it as one might use a suitcase when I stay in a house. I load it up with the little cubes that organize my clothes, the dirty clothes bag, and whatever other stuff I think I’ll need. I’d been staying in people’s houses for several days by this time, so lots of stuff was out of place. When you live in 85 square feet. It’s really, really important to have everything in its proper place. Learning to live this way has been a real challenge for me.

In addition to the stuff that was normally out of place, I’d tossed all of the “way-back” stuff off of the top of the engine compartment and into the floor of the camper, so I had a fair amount of moving in to do. Once all of that accomplished, I returned to the apartment to find all of its inhabitants up and operational.

Though I’d intended to make a quick getaway so that my friends could return to their life unencumbered by an extra body in the midst of their smaller-than-they’re-used-to living space, we all ended up going out to breakfast at The Buff.

In order to get some idea about where I might go, I stopped at a ranger station just outside of town. Sadly, it was closed on Sunday. I looked at a publicly displayed map and was sitting in Walden about to head out, when a ranger drove up and spent about five minutes making suggestions about where to go.

I then made a stop at REI and about one of those plastic bags with a long straw on it so that you can drink from your backpack. I also got a smaller cable to lock up the bike, the one I have is heavy and awkward.

One thing I’d intended to do before leaving Boulder was to play guitar on the Pearl Street pedestrian mall, but I decided that I was really ready to get on up the road.

I hit the Whole Foods, or as some call it, Whole Paycheck and got some provisions. When I returned to Walden, he was blocked in by a tow truck that was loading up a BMW motorcycle. Having loaded Walden onto such a time or two myself, I was more sympathetic than annoyed by being stuck. I went back in and bought more stuff and they were gone.

On my long bike ride, I’d gone by a place that looked like they allowed camping, so I stopped there. Alas, they wouldn’t let me park there for any fee. Well, that’s not quite true, for $85 I could park there an have a room. I wasn’t interested. What I wanted was just a place to park and to be able to ride my bike back down into Boulder, perhaps with my guitar on my bike so that I could hit the mall, but it wasn’t to be. 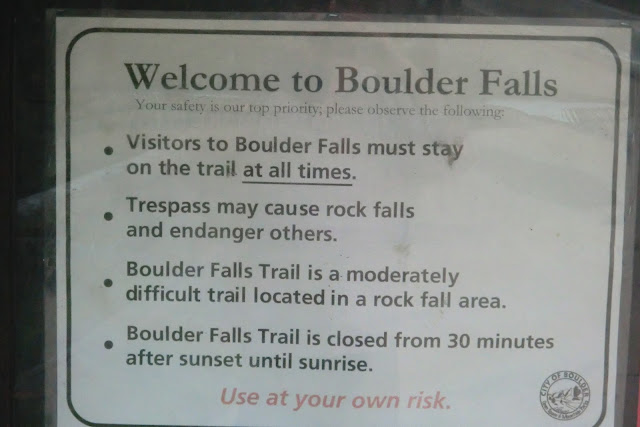 We headed on up the road and a bunch of people were stopped at Denver Falls. It seemed like a thing to do, so I parked and checked it out. I packed up my ultralight technical day pack with water, found a camera, and decided to leave the rain coat behind. I figured that if I rained, I just change when I got back to Walden. The instructions said that it was “moderately difficult,” but nearly everyone I saw was making the 200 yard hike in flip-flops. I probably could have done without the pack or the water. There was a constant flow of people and there were many spots that did not allow people to pass simultaneously in both directions. I hurried to get out of the way of a woman who was wearing a baby on her chest so that she might pass. She muttered something about not waiting for the woman with a baby. Apparently she thought that I should have chosen to wait at an earlier spot on the trail. I think that the 200 yards wearing a baby had worn her out. At the end of the trail, sure enough there was a water fall. 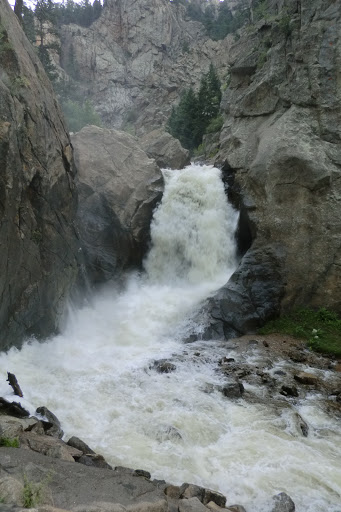 As we headed on up the road Walden seemed especially sluggish. Either these mountain roads were much steeper than they appeared, or Walden was even more underpowered than he is on a good day. And on we went, very slowly. Whenever possible, I pulled over so that people could get by. It was the afternoon, and though I made it back from the falls without seeing significant precipitation, the skies darkened, and a torrential rain started. It was such that lots of people were pulled over. Walden and I forged ahead. Then it started hailing, and I decided that maybe it would be better not to be driving even 25 MPH with pea-sized hail falling. It was really a pretty impressive storm. In this picture you can see both the hail and a river of water on the street. 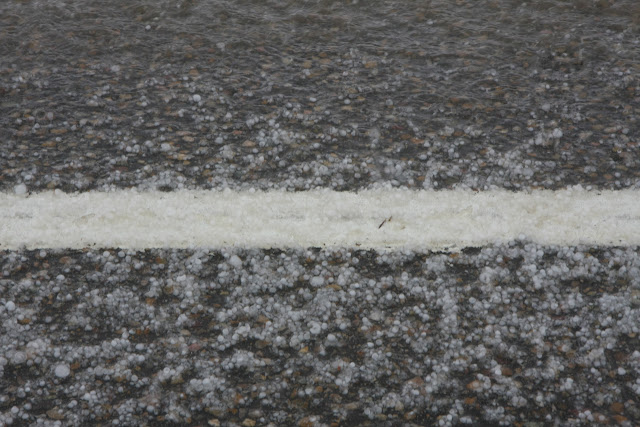 The amount of hail that fell was pretty incredible. There were tracks in the road as if there had been a snow storm. 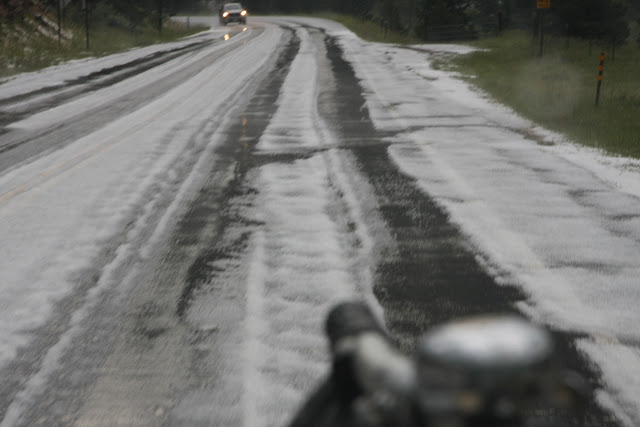 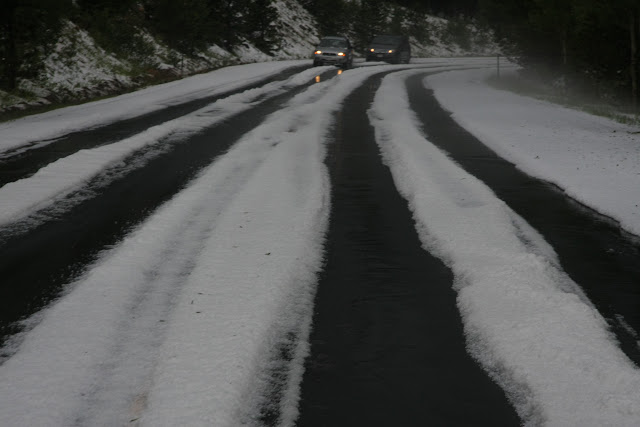 Perhaps more impressive was that in lots of places rocks had washed across the road. This was a pretty crazy storm. 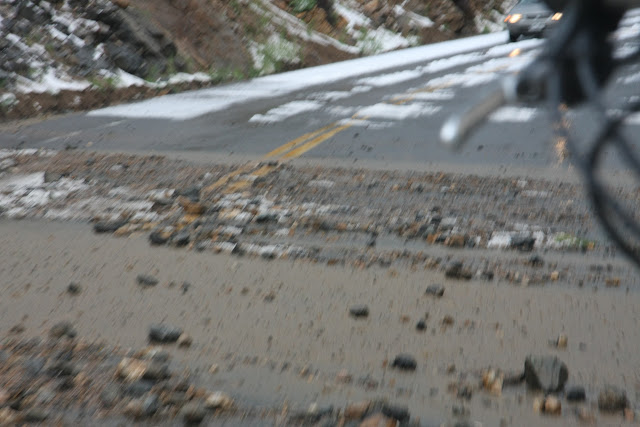 I stumbled on a campground, but it was closed for renovation. Eventually I found my way to a parking lot by a trail head. There was a sign that showed where trailers were supposed to park, so I parked there. There was also a little building with what is apparently known in the vernacular as a “vault toilet.” What that means is that there’s a hole in the ground with a thing that resembles a toilet, sitting on top of it. It may not sound like much, but it beats a bucket.

I went ahead and settled in for the night by about 5:00. It started getting chilly and for kicks I cranked up the furnace. It takes a long, long time to get cranked up, I think because if it’s off for a long while, the there isn’t propane in the line. Perhaps I should check again for leaks.

In Boulder I had copied five seasons of How I Met Your Mother to a hard drive, so I hooked up the laptop to the auxiliary in of the stereo and watched a few episodes. I don’t love it, but it’s mildly entertaining.

I read later that you’re not supposed to stay overnight at trail heads. I didn’t see any signs.