It’s just not that easy

One of the things about a 25 year old car is that stuff that should be easy just isn’t.Yesterday afternoon, the first two boxes of parts arrived. I figured that it wouldn’t be that difficult to install an antenna so that my new stereo could receive more than once channel. Quick and easy. Or so I’d hoped. If you want to hear about the trials and tribulations of installing an antenna, bumper, and mirror, read on.

I looked at some instructions but perhaps a bit too quickly. It might have helped if I’d actually read them rather than just looking for bits that I thought were important.

One of the things he said was “- On the top of the antenna housing, on the slope of the nose, is a little nut looking thing. It is rounded, but flat on two sides. This thing will unscrew. It’s a ‘nut’ that holds the antenna tight to the sheet metal. Take it off.”

As it turned out, that in contrast to Joe’s experience, the ‘nut’ would would not unscrew. I basically had to rip the thing apart. And the way that the unscrewing happened caused me not to pay attention to some other things.

For example, he said that I needed some little wires to poke into the stereo to remove it. That’s just wrong, what I needed was a card to slip into the side. If I’d known that, it would have been much, much easier to install the stereo in the first place. I’d already figured out that by this point, though.

If you ever need to remove a stereo from an older car, this card in the side trick could save you some time. I used a local grocery store’s big brother card that I trimmed a bit with some scissors. Push it between the stereo and the metal cage that it sits in. Knowing this sooner would have saved me an hour. 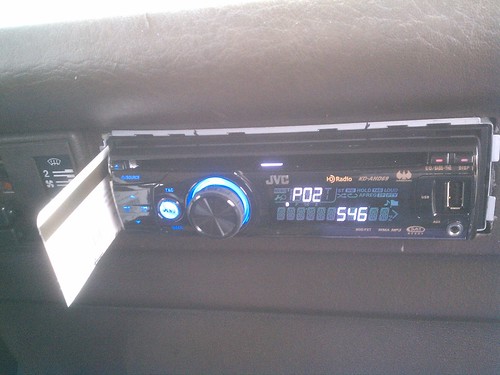 removing stereo with a card

Anyway, I did manage to use a coat hanger to fish the old antenna cable to the antenna and then used it to pull the new cable to where the radio is. (I’ve heard it said “No wire hangers, ever” but golly, they sure can come in handy.) In the course of getting the stereo reinstalled, however, I managed to disconnect my switch that lets the radio play with the key removed andblow the fuse that makes the radio work. I was forced to go to bed without finishing that little task.

This morning I started again on getting the key-bypass working again. I decided that I needed a wrench to remove the nut that holds the switch on so that I could figure out which wire was which. That task did get accomplished. Check the cool safety switch I installed: 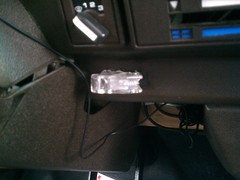 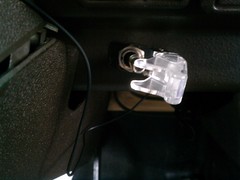 There is actually a cool blue indicator LED that comes on when the switch is on, but it’s really annoying at night, so I disabled it.

Replacing the driver’s side mirror was as easy as it was supposed to be, 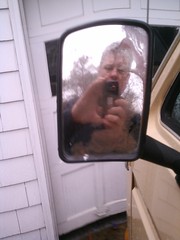 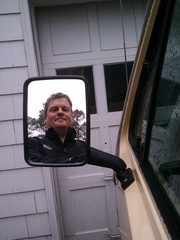 as was replacing the worn brake and clutch pedal pads: 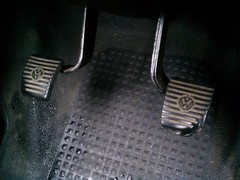 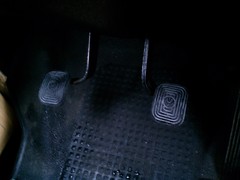 I also was able to get the new auxiliary battery installed in place under the driver’s seat by removing the steering wheel (I’d read somewhere that it was much easier to remove the steering wheel and turn the seat around rather than remove the seat, and they were right!). I don’t have the battery wired up yet, but it fits, so I’m a step closer.

With a false sense of security, I decided to install the new bumper. In one picture I’d seen, there appeared to be struts that went up under the car. As it turned out, though, it was much easier, just four bolts hold the sucker on. I pulled out my new 13mm wrench and removed the four screws (it would have been easier to remove the bottom bolts before the ones on the back side). I unwrapped the new bumper and screwed on one of the bolts. I went to screw on the other bolt. Lo! The holes in the bumper are not aligned with the threads. They’re a good quarter inch off. The old bumper had a wide hole rather than one that’s just the size of the bolt. I’ll need to find the drill and probably buy a bit that’s the proper size.

Oh well. At least I have made some headway on the To do list.

1 Response to It’s just not that easy