I’m sure you’re wondering just what I’ve accomplished in the past couple of days. If you’re my student who’s wondering why I haven’t gotten his/her/hir dissertation proposal back, this is not the post you were hoping for (though I did start reading it this morning and should have it returned by tomorrow). It’s all small stuff, not that exciting, but I do have pictures.

In 1985 car designers thought that people would not to consume beverages while driving. It would be dangerously distracting. Besides, what if you hit a bump and spilled your drink? Now drivers need cup holders to free our hands to answer the phone, send textual messages, and look at a tiny screen to see where we are rather than, say, looking out the window or using a map. (The user interface on those things was horrible! Not only did they not indicate where you were, but they also required a minor in origami to get them back into the glove box.)

As a fan of the Super Big Gulp I need a place to put down my drink. (Sadly, there are no 7-11s here, but thankfully nearly every rippy mart has adopted the 44 ounce cup.) I went to one of those stores that sells things for boats and bought a cool-looking circuit breaker thing. I’m not sure whether I’ll find a place to mount it, but it holds promise. I also bought two of those swinging cup holders that you might put on a boat. I tried mounting one to the new console, but was reminded that gravity holds that sucker in place and hanging things on the cantilevered ledge is not a good idea. I returned those two $15 units and got a $3 thing that I just screwed on top of it. It doesn’t block my view as much as you might imagine. 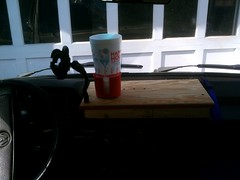 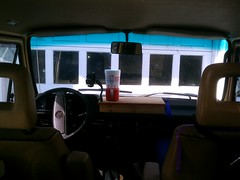 I also replaced the thing that opens (and hopefully closes better than gravity alone) the sky light. This is a bad picture of the mechanism, but it’s a pretty view of the sky. 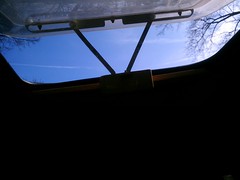 I also got a Pelican box that locks into place on the roof. It seems like a very little space for an awfully lot of money (the inside dimensions are: L42.00″ W13.56″ H5.31″), but it is pretty cool. If I ever want to check fire arms on a plane, this is a great box for it. I would have to buy some foam to go in it, and, of course, fire arms. 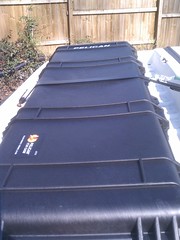 I also installed some of those things that go over the windows so that you can open them a bit in the rain. 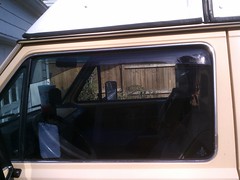 This is exciting. I replaced the bolts that hold the passenger side seat belt with these eye bolts that can be used to lock stuff up or connect Thor’s leash to. I don’t think I was drunk when I ordered them and they were cheaper than the cat carrier. (And no, Thor and I are not taking the kitty on the road.) 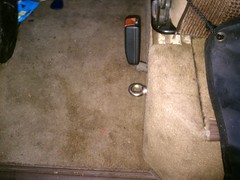 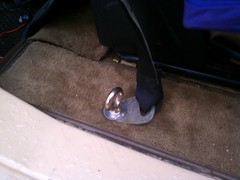 In other news, the CWNN is at the shop, hopefully having the rear wheel bearings replaced. I’m hoping to take a little shake down cruise to the Red Neck Riviera next week.

Now, to get to that dissertation proposal. . .