I decided that Walden’s lack of power and occasionally-loud fuel pump warranted a trip back to the mechanic, so Tuesday morning, I got up and headed back to Englewood. It seemed that Walden had somewhat more power as I got down to Denver’s 5000 feet as opposed to Nederland’s 8000, but it still didn’t seem quite right.

When I asked Larry about it, he said, “Yeah, it seemed pretty sluggish, but since we hadn’t done any work to address that, I didn’t think anything of it.” I had pretty much begged Larry to do any work that he could think of, but in spite of his noticing the thing seeming slow, he didn’t say anything about it. Had I had any more trouble with the car quitting, which was why I’d brought it to him to begin with? Well, no, I hadn’t.

If I lived in the area, having a mechanic who was not interested in doing work that I might not need need would be a great thing. In this case, however, it was somewhat disappointing. He couldn’t squeeze me in on Tuesday, but would try to get me in the next day. I located Bear Creek Park, not too far away, which was supposed to have some camp sites.

After Google leading me down a road that is only for after-hours use, I found my way to the park entrance, paid $20, and found a camp site by about 2PM. It was getting hot, so I popped the top, opened the flaps, and set up the carport tent to provide a bit more shaded area. I considered biking over to the lake where people were swimming, but ended up just hanging out in Walden for the afternoon.

Later in the afternoon, the rain came. And the wind. The wind blew and blew. It picked up the side of the carport tent. It was amusing, I took a picture. Other people’s tents were getting seriously blown around. An inner-tube-shaped pool toy rolled by at a considerable clip like a tumbleweed in a cowboy movie. I considered trying to catch it, but before I could even make a decision about how to do so, it was gone. The wind had fanned the wood that the campsite’s previous occupant at left smoldering in the fire pit and it was now burning pretty well. 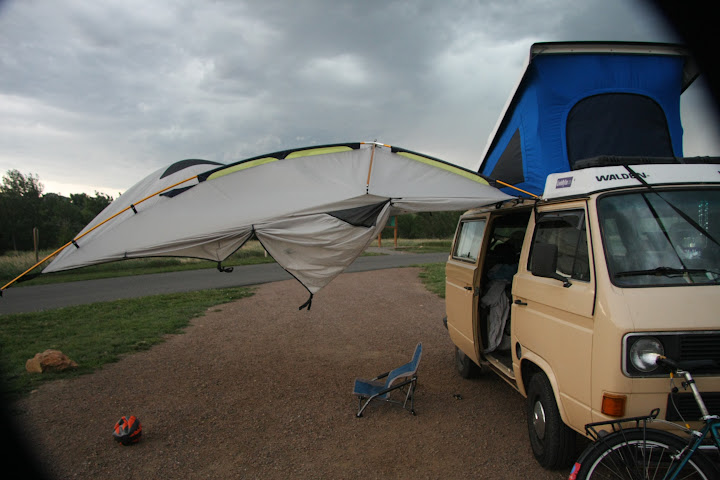 Just as the rain was starting, I decided that the wind wasn’t amusing any more and that I needed to take down the tent as soon as possible. There was no time to carefully remove the poles from the tent, so I tried leaving the poles on the thing and just pulling them apart enough that I could get them in a wad that would fit in the passenger seat.

Then, in spite of the rain, I ran back outside to retrieve the table that gets mounted up front. It was under the cushion in the back and I couldn’t get to it without going outside to open the hatch. It was the first time I’ve used this table, which is lucky for it, because I was starting to think about getting rid of it.

With the table mounted up front, I was able to put the laptop that I use for watching video on the front table while I ate and computed at the rear table. Oh! And better still, I was able to use that table to watch laptop while I was lying down. In light of the windstorm, I dropped the top and slept downstairs.