A Place for Thor’s Kitty

The doorbell rang today at about 2:00. Thor and his kitty ran to see who it was. Thor is especially concerned about people who ring the doorbell. As far as he can tell, no good can come from it. I saw a FedEx guy going down the driveway. He’d left a box, as those people are wont to do. Perhaps this is why Thor is so convinced that they are terrorists. Read on to see what it was.

I opened the box, wondering what it could be. I’ve ordered a number of things for the Camper with No Name and am expecting two pretty big orders to be delivered Real Soon Now. I pulled it out. It appeared to be one of those folding camp chairs. Odd, I thought, as I had no recollection of ordering one, and I’d just bought one at REI on a recent trip.. 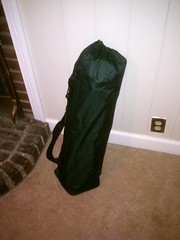 I pulled it out of the bag. It was most certainly not a chair, but what was it? It opened up into some kind of box, or . . . a . . . cage. I had a vague memory of some kind of cat carrier, but this thing is huge. What did I pay for this thing? How drunk was I when I ordered it?

It’s true that Thor has not yet gotten a cat carrier, which is important because he needs to get regular steroid shots for his Frakta luggage straps I’d gotten on a recent Ikea run. Check it out! 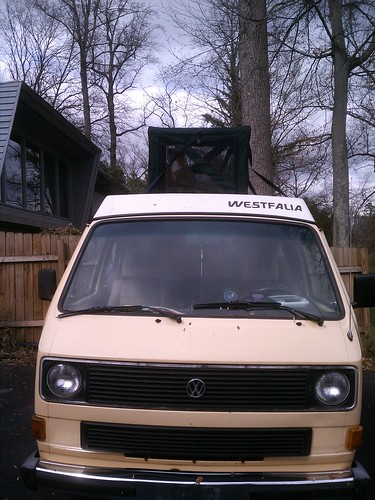 Here’s another shot so that you can see the kitty a bit better: 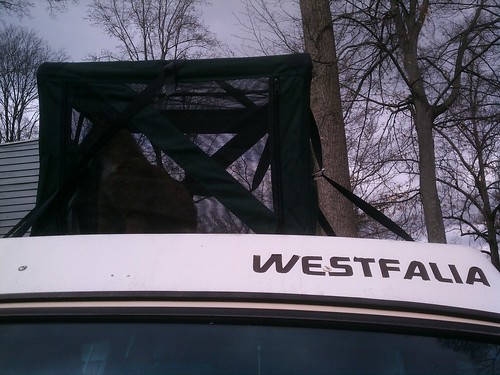 Actually, the kitty does seem to like this thing much, much more than the smaller-than-a-breadbox carriers that I’ve used before, and riding on the roof, he gets lots of fresh air.

After I got the carrier and the kitty out, I encouraged Thor to get in, but he just wasn’t interested. Here he is next to the carrier so that you can get a sense of scale. 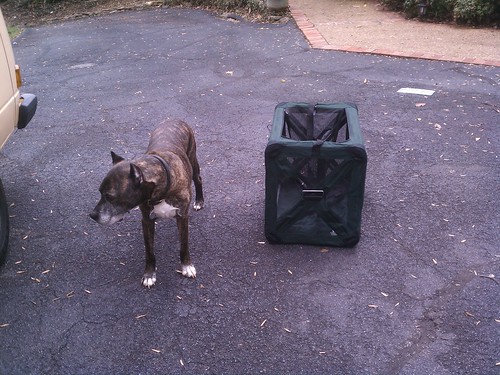 And no, I did not and will not actually drive around with the kitty on top of the car, but it is still making me laugh.

Oh, and I checked my Paypal statement and found a charge by “dealonly” for $9, which seems quite reasonable for this palatial carrier. I then went and checked my spam folder and found that I’d placed the order at or about 4:47 AM last Saturday, the night that Thor and I slept in the camper.

I repeat, for any cat lover that may happen by, it’s just a joke. I will not drive around with the cat on the roof, even though strapped down with that Frakta, he’d be plenty safe.

4 Responses to A Place for Thor’s Kitty