A Day in Nederland

I woke up at the trail head, made use of the fine facilities, packed up and headed down into Nederland. The nice park ranger I’d talked to in Boulder said that Nederland was a cool town and would be a good base. A friend who had learned of my whereabouts sent me a textual message that said that marijuana was legal in Nederland. I assumed that she was confused, since medical marijuana is legal in all of Colorado. She told me to check wikipedia, but I didn’t.

The first thing I did was to find the hardware store that also is a welcome center to see if I could get any maps of the area so that I could figure out where to park and perhaps places that I might walk or bike around the woods for no good reason (some call this “hiking”). The folks there were very, very helpful and patient in getting me the maps I needed. I got some cool maps and they’re made of plastic. I probably should get a compass if I’m going to try to make use of them in the woods, I suppose. I don’t know what it would matter, though. I have been unable to follow a map since I was a grad student at Stanford and ran this study that involved people turning maps as a means to imagine themselves in another place. I used to know my right from my left and could figure out whether a given turn on a map was right or left, but I now am completely unable to do so.

After the hardware store I found my way to Happy Trails, a bike shop
and a coffee shop. There you can rent a bike and get a cup of coffee. That’s Colorado for you. What I got was a place to sit down and soak in some electrons. They have wifi, once you ask and get the little laminated piece of paper with the 12 digit password. I spent all of the morning there, trying to catch up on telling you this story. I’m quite behind now.

I’m not sure whether it was because I was there for so long or if Ned just attracts the kind of people who will approach someone who has a iLiveInMyVan.com bumper sticker on his laptop, but several people struck up conversations with me.

Perhaps the most interesting was guy from Australia who’s been hitchhiking for the past several months, actually, the better part of two years,though he’d been back to Australia a few times for visa reasons. He had just bought a motorcycle. Having lived in a few different states, I know that figuring out how to navigate a DMV can be quite a challenge. It turns out that if you are a foreign national, it’s even more difficult. He had tried diligently to register the bike in his own name, but finally gave up and had a friend do it. More troubling, though, is that he doesn’t know how to ride a motorcycle. He seemed appropriately terrified to be learning to ride on the mountain roads of Colorado. I gave him a t-shirt. He promised to send me a picture of himself wearing it. I haven’t gotten one yet. I hope it’s not because he slid out on a sandy curve.

Perhaps part of why I gave him a t-shirt is because that box of 40+ t-shirts is one of the most annoying things that I have in Walden. I am not much of a salesman in the best of circumstances, and it turns out that the kind of people who seem very excited about having an iLiveInMyVan.com t-shirt are not the kind of people who have $15, much less the $20 that I once hoped to get for them.

At Happy Trails I also met a guy with a mountain bike on the back of his motorcycle. 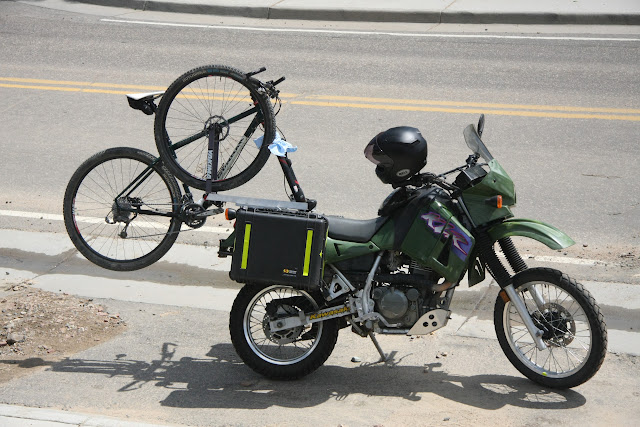 Also attracted by my iLiveInMyVan bumper sticker was a woman who’s been couch surfing from Chicago. Just rented a room in Denver. Guess what? She thought that it was awesome that I have iLiveInMyVan t-shirts. She said that maybe in a month she’d have fifteen dollars. I probably should have given her one on the off-chance that she might.

After four hours in the bike/coffee shop, I headed over to Wild Mountain Smokehouse and Brewery and took a seat at the outside bar. Sitting beside me were two women who had been friends in Chicago. One had just moved to Boulder. The other was contemplating moving to Boulder or Portland, OR.

The first thing that Ms. Boulder did upon her arrival in Colorado was to get a prescription for marijuana and start growing her six plants. I didn’t ask what ailment she had that required this medicine. She didn’t seem to have glaucoma. She didn’t mention cancer. I had been curious about the medical marijuana thing here in Colorado, but hadn’t yet met anyone who had any first-hand knowledge. I learned a few things about how it works.

Not surprisingly, it is not difficult to get a prescription.

One can buy no more than two ounces of marijuana per day. Two ounces. Per. Day. According to Answers.com, a cigarette contains .8 grams of tobacco. An ounce is about 35 times .8 grams, so for a frame of reference, two ounces of tobacco would yield about 3.5 packs of cigarettes.

As my friend had texted me earlier, this woman informed me that in Nederland you can’t get arrested for the sale, purchase, possession, consumption, transportation, cultivation, manufacturing, or dispensing of marijuana.

After my lesson on Colorado marijuana laws, the three of us walked around town for a couple of hours, talking about travel and the merits of living in Boulder and Portland. For Ms. Undecided, Portland had the appeal of a man who was very interested in her moving to Portland. He’s a bartender, and we discussed the possibility of my joining her for drinks while she waited for him to get off work sometime in August.

We parted ways and I headed for the hills. I drove and drove. I couldn’t find anything that looked like a good place to park. I was somewhat anxious about parking far away from the road, especially down a hill, as Walden was moving slowly. I was getting discouraged, and finally turned around to stop at a little watering hole that proclaimed to have the best pizza. This was clearly not a tourist bar. I hung out for a while and then most of the crowd that was there left to go bleed someone’s brakes.

Eventually I decided to head on back to the trail head I’d parked at the night before. When I passed an abandoned mine, I realized that I had gone too far and had to turn back around. Finally I made it back to the place, pulled in where I’d been the night before, and settled in for the night.

I haven’t prepared much food in Walden, but on this occasion I decided to make some tuna salad. It was pretty tasty. 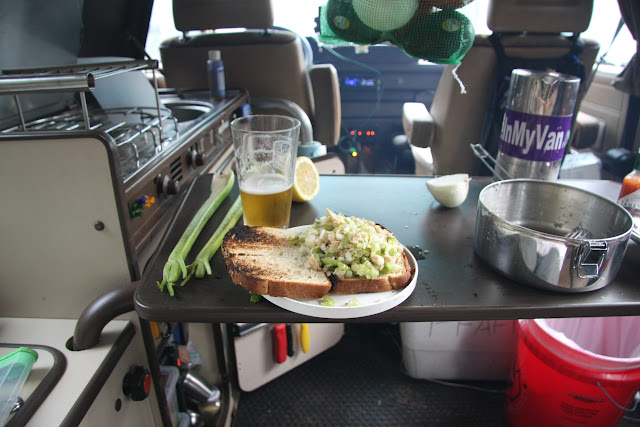 Like Loading...
This entry was posted in All, Best, iLiveInMyVan, Parks and tagged Uncategorized. Bookmark the permalink.

2 Responses to A Day in Nederland