I love the Robber Barron houses like Biltmore and Hearst Castle, but I decided that I’d forgo seeing Hearst Castle this trip. I was already south of it and had planned to meet up with a women who follows my blog. She manages the Julia Morgan papers at Cal Poly in San Luis Obispo (aka SLO). Julia Morgan designed Hearst Castle as well as a house that my father once owned in Berkeley.

The thing about SLO is that once upon a time I was married, and I needed to work really hard writing a little paper. The woman that I was married to didn’t want to be around me when I wrote this paper, so she and a mutual friend moved to SLO while I stayed in San Francisco to write that dissertation and hang out with Thor. At this particular time, when I was working 100 hour weeks, it might have been nice to have someone around to help care for the house, not to mention Thor, who at least one day was left home for 18 hours. (I’m not sure how he held it for so long, but he did, but that’s another story.) The last communication I had with my former spouse was a text message exchange sometime a few days before April 15 in 2005, when she asked me just how much of the money I had given her the year before she had to pay taxes on. I was in Canada at a conference, and was pretty sure that she had signed the same papers that I had. I wasn’t at all surprised that this was our last communique. I’d seen her cut off friends before, so I was pretty clear that she would want to have nothing to do with me after the divorce was final. I did get a phone call from her once a year or two after the divorce; I didn’t answer, and there was no message. I figured that she’d called by mistake. Sometime in the past year or so a friend Google-stalked the ex and found that she works at California Polytechnic Institute.

Returning to SLO and being on the Cal Poly campus gave me a strange feeling. I was reminded of when the narrator in Zen and the Art of Motorcycle Maintenance returned to Bozeman, Montana. Though I have not undergone electroshock therapy, I am a pretty different person than I was when I was last in this place.

Hostess gave me directions to a parking lot with meters. I was out of change and she came down with a wad of quarters and filled up the meter, all the while thanking me for visiting. I was then treated to a delightful and fun sampling of stuff from the Julia Morgan collection. She showed me what they had related to my dad’s former house (which wasn’t that much, but it was still fun) and I got to see a bunch of Julia Morgan’s actual drawings. It was really pretty cool. I suspect that if you were to call or go by there, you too could see the stuff. The thing that most people don’t know about librarians is that they actually want you to look at the stuff that they so often appear to be keeping you away from.

After my tour, which my description here does not do justice, she got a photographer to come down and had him photograph me and Walden to put on their blog. As he started circumnavigating Walden snapping photos and my hostess talking about posting pictures on the library’s blog site, I imagined what my ex would think if she were to come across the story. She had always wanted to travel, but we had never budgeted money well enough for me to feel OK about taking many big trips. Even when we got a chunk of cash for selling relax.com (some Swiss insurance company bought it for an arbitrarily high price that I set), we still didn’t do a big trip, perhaps because I was in grad school and thought that I should be working toward the degree. So the thought of her learning that I was on a trip that, at this point, at least, has no end in sight, made me laugh out loud. No, I don’t mean that in a colloquial or metaphorical sense. I really did start laughing. 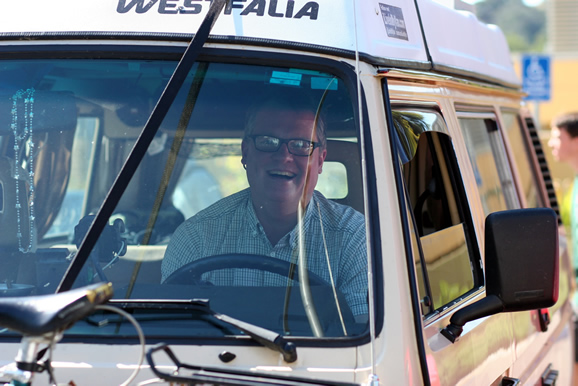 Here I am in one of the other really silly shots. 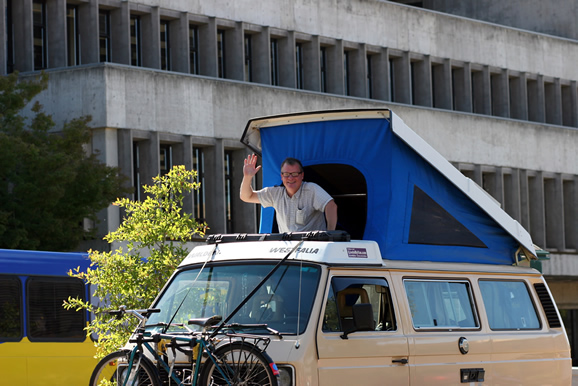 After the photo opp was over, I moved Walden back to his parking spot, Hostess shoved some more money in the meter, and we walked a block or so to a cafeteria on campus. I was now starting to feel almost uncomfortable as I imagined running in to my ex-wife, but tried to appear unfazed. In addition to insisting on buying my lunch, Hostess bought me this candy bar. 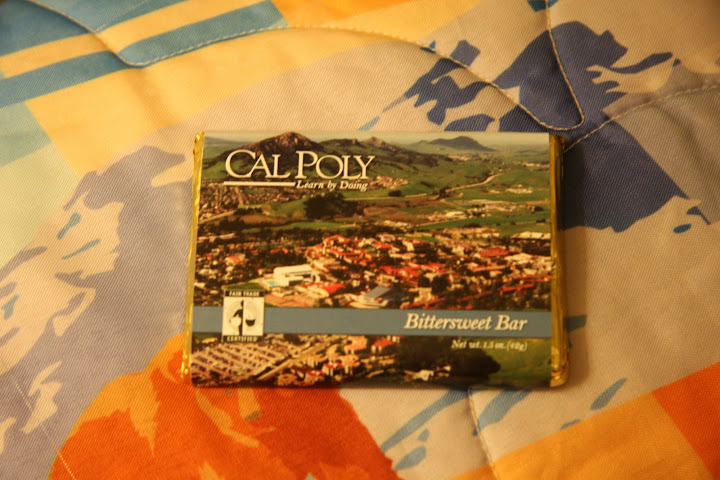 I’m sure that “Bittersweet” thing was just the candy that she thought would be the best, but it seemed eerily apropos.

As we parted, she thanked me again for visiting. I still find it somewhat surprising when people thank me for me providing them the opportunity to buy me lunch. “You’re welcome” just doesn’t seem like the right response. I generally go with “Thank you.” So after the thankfest, I headed on into SLO where I saw some sights that she’d recommended. I first visited a Barnes and Noble where I used the bathroom and got some free text on my Nook. I then found my way to a (. . . wait for it . . . ) brewery. 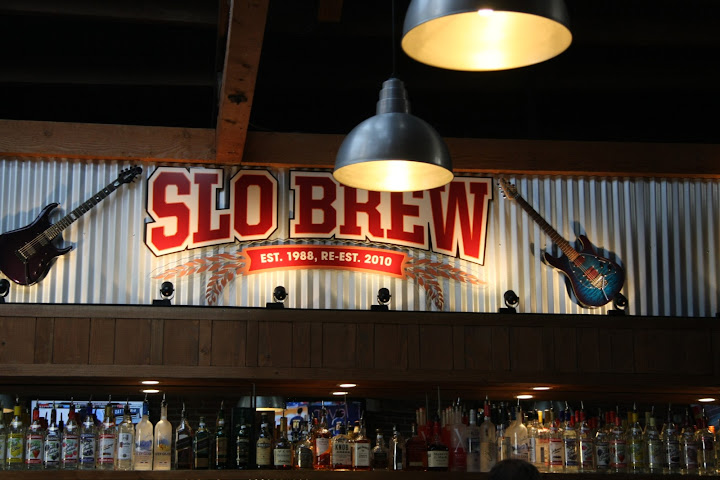 And just outside the brewery I was able to find my way to Bubblegum Alley, a spot recommended by Hostess. 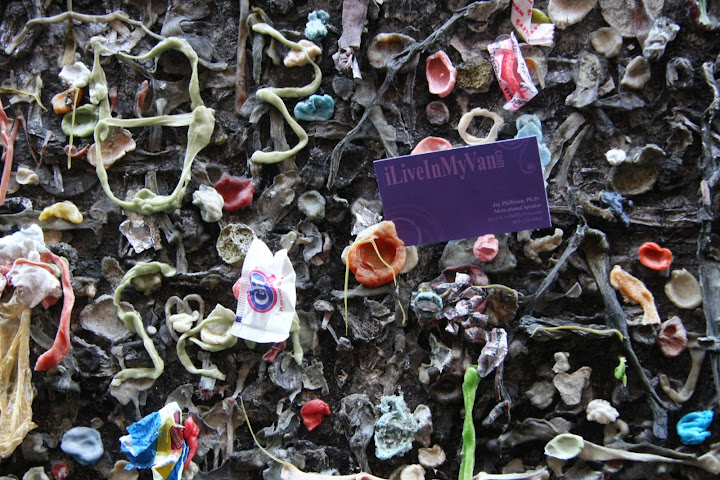 Actually, the pictures don’t quite do it justice, but I tried. There are a few more shots at the link below. 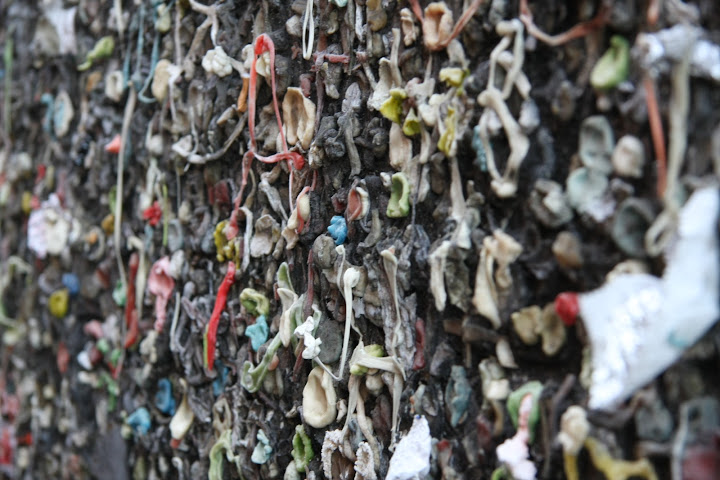 It was time to get moving. I was to meet some family members at a motel in Buellton, California. We were convening there to see my cousin ride a century (that is, one hundred miles, on a bicycle). They were driving up from LA after work, so they’d be considerably later than I. I made a point to stop at the Madonna Inn, again, at the behest of Hostess. I’d been in before when I was making this trip with Ex, but I didn’t remember the men’s room, which Hostess said that I shouldn’t miss. I never asked her how it was that she came to be in the men’s room. It was cute, though. There was a motion sensor that flushed when the place to pee was approached, then water dripped down and there were sounds of thunder. I’m afraid this is another sight that is not well captured by photography, at least not mine. 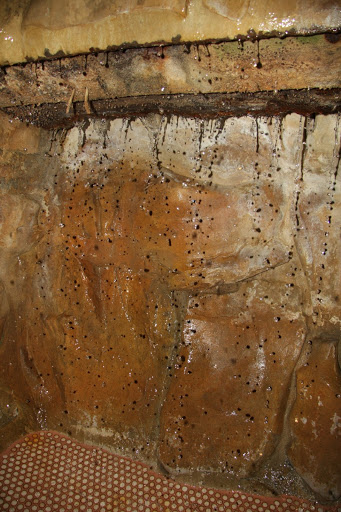 The Madonna Inn is a pretty cool place, with lots of unique and silly rooms. They’re in the $100-$150 range (well, and on up). If you’re on a trip and want to splurge a bit on a silly time, I say go for it. They wouldn’t let Walden in to any of the rooms, though, so I headed on down to the Motel 6 to stay with my aunt and uncle.

Like Loading...
This entry was posted in All, Best, iLiveInMyVan, People and tagged Uncategorized. Bookmark the permalink.

2 Responses to A Bittersweet Visit